In late 2019, a major offshore wind developer mobilized Oceaneering’s Isurus™ ROV on one of its cable lay vessels.

The customer was interested in improving the performance of their vessel and enabling it to deliver more efficient cable lay activities. They contacted Oceaneering seeking a method to increase the operational window for Remotely Operated Vehicle (ROV) operations across their European offshore wind farm projects.

To support this, Oceaneering built on more than 60 years of expertise in the ROV industry to deliver Isurus — an next-generation ROV optimized for use in high currents and ideally suited for sea conditions often encountered in wind farm areas. ROVs are an essential component of cable laying activities as they facilitate touchdown monitoring.

Traditional ROV systems, however, are limited by the speed at which then can work and the currents their systems can withstand. The developer required an alternative to the traditional ROV systems that either slowed or stopped operations completely during rough sea conditions.

Oceaneering has both extensive experience and an industry-leading fleet of ROVs. Wanting to ensure the highest level of integration into already-existing infrastructure, especially where Oceaneering is the incumbent ROV on a vessel, the team behind Isurus started design efforts by reimagining the field-proven Magnum® Plus ROV.

By adapting the body shape to a more hydrodynamic design and equipping the ROV with highly-powerful thrusters, the operational capabilities were greatly increased. When compared to traditional ROV systems that were limited to speeds of 1.5 to 2 knots, Isurus stands out. With speeds up to 5 knots — 2.5 times faster than any other work class vehicle in the fleet — the step-change in performance transforms the ability to complete work scopes in high currents and harsh environments.

Vehicle engineering was completed by a global-based Oceaneering team and was manufactured in Morgan City, Louisiana, where it also underwent full and robust factory acceptance testing. In late 2019, Isurus completed speed and agility testing where its capabilities were confirmed. The vehicle was mobilized in October 2019 and has been delivering operational support since.

Since commencing operations in October 2019, the Isurus system has had zero downtime due to breakdown and has increased the developer’s operating window by up to six hours a day. The scopes of work included cable touch down monitoring (TDM), cable installation, monopile pull-ins, and as left/built surveys.

Isurus has enabled a reduction in project costs while delivering float to the project schedule thanks to its ability to hold station in ripping currents. It has proven itself as a strong platform for reliable sensor data in very strong currents where a standard work class ROV would fail to perform. 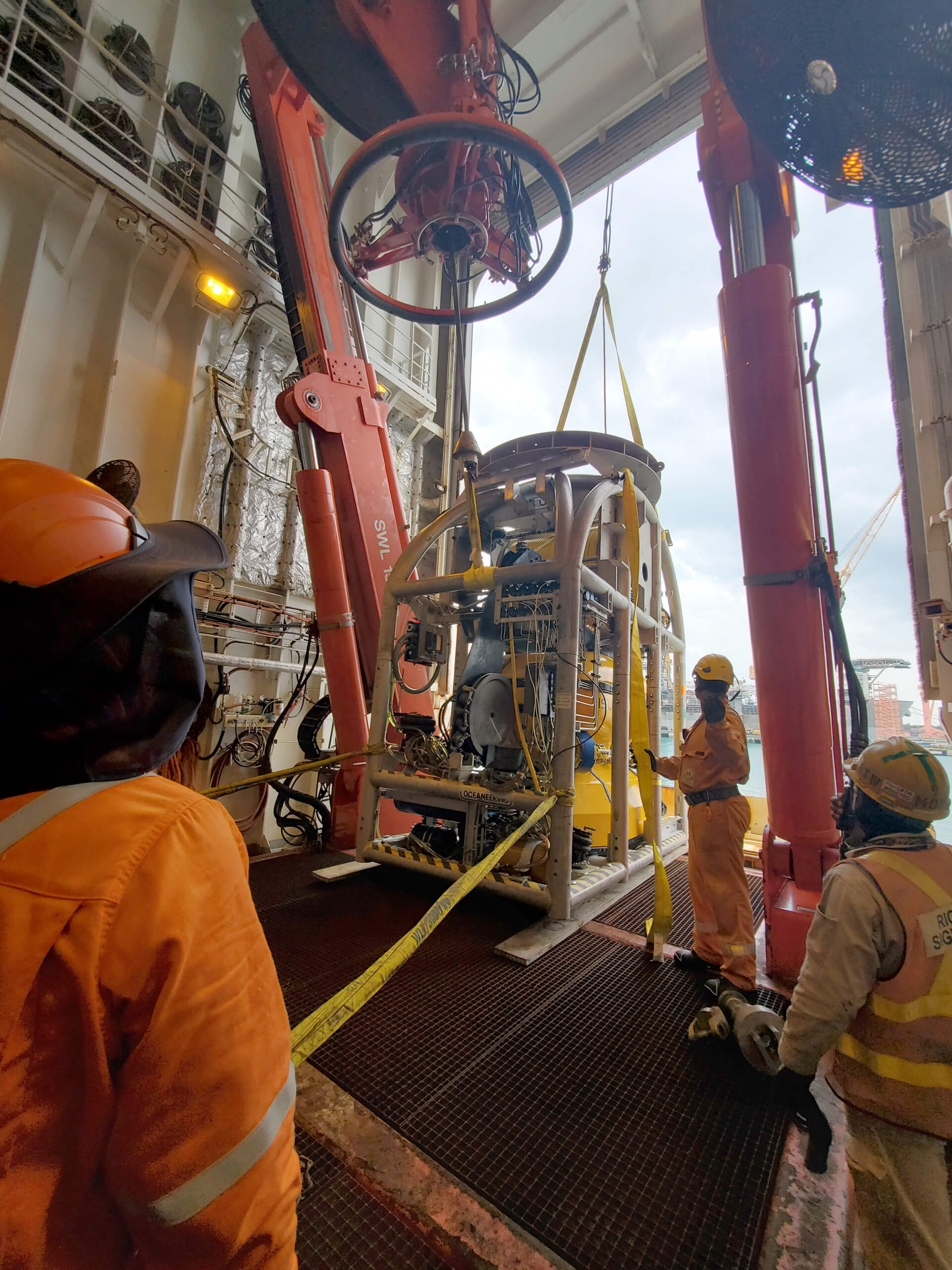 The mobilization and deployment of the Isurus™ ROV enabled the developer to complete work scopes in severe current conditions.

Isurus has enabled a reduction in project costs while delivering float to the project schedule thanks to its ability to hold station in ripping currents. It has proven itself as a strong platform for reliable sensor data in very strong currents where a standard work class ROV would fail to perform.

The ROV has provided, on average, an increased working window of six hours per day. With vessel day rates a high priority, this is clearly an advantage that can leverage to deliver the desired results to end clients. The ROV has been fundamental in driving down project costs with its agility to hold station in ripping currents and providing a strong platform for reliable sensor data in very strong currents where a standard work class ROV would fail.

The Isurus ROV is currently on a multi-year contract and the fleet is being expanded to meet increased demand.

Learn more about Oceaneering’s high-current capable Isurus ROV, or download a pdf of this case study.

Find out how our Isurus™ ROV can put float back into your next project.